This visit was initiated by Judith Fleischer from the NJMEP office in Cedar Knolls, NJ. Judith is the special projects person at NJMEP which has helped manufacturing in NJ with various programs such as increase sales, process savings, training programs, and capital investments.

The students represented the pre-engineering and manufacturing classes from the Middlesex Vo-Tech School. The instructor, Mr Stephen Mercadante, came with the group and had prepared them the day before by reviewing Premier’s web site and presenting topics such as ISO, 5S, CNC machining, and die design software. His students had served as ambassadors to NJMEP’s Manufacturing Day Event in 2016. The students were bused over to Premier and were introduced to a presentation about the Company followed by a “careers in die casting” video. After the video the group was escorted throughout the plant and shown all the processes, robots, die cast monitors, and CNC machines in action.

The students were mostly freshman and sophomores in the county school and, although not decided upon a career just yet, the opportunity to work in die casting was presented to them to consider.

One of the topics presented to the group was the availability to procure a scholarship from NADCA (North American Die Casting Association). NADCA has offered scholarships through the David Laine Fund on a yearly basis with 2016 giving out 17 scholarships for a total of $40,000. 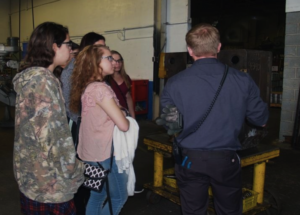 Typical scholarships range from $1,000 to $2,500 per student with more consideration given to a student in engineering that interned at a die cast plant during their education. Students interested in applying for a scholarship must complete an application that includes a project write up in die casting.

As a company interested in promoting our industry and helping the local schools develop technical talent the Management at Premier were very excited to open our doors to the next generation of technicians and engineers.

If you have any parts you would like Premier to review, please send your drawings or electronic files to lc@diecasting.com.