NJMEP worked closely with the New Jersey Legislative Bi-Partisan Manufacturing Caucus to bring manufacturers to Metuchen, New Jersey on Tuesday, August 14th. The Caucus hearing was hosted by SPEX CertiPrep, which has been servicing the scientific community since 1954. They are a leading manufacturer of Certified Reference Materials (CRMs) and Calibration Standards for Analytical Spectroscopy and Chromatography. 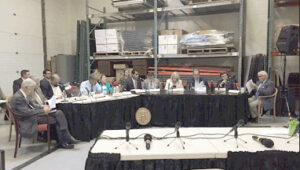 Several manufacturers sat on a panel to testify before the Caucus. It was a great turnout as manufacturers came from all over New Jersey to show their support. Manufacturing leaders provided testimonies regarding real concerns and issues with policies that are impacting their businesses. The main topics and concerns discussed included:
· Tariffs
· Apprenticeships
· Minimum Wage

Caucus Chairman, Senator Gopal called upon the first group of manufactures to discuss Tariffs. The issue with the tariffs is that they are impacting the supply of raw material. Marcia Frieze, CEO of Case Medical, said “This is a national issue that is affecting manufacturers and consumers throughout the country.”

Gail Friedberg, Vice President of ZaGo Manufacturing Company supported this point by adding, “Do we take a hit from our profit or do we charge our clients more?” “The taxes are just too high.” The cost increases for raw material have ranged from a 10 to 20 percent increase causing manufacturers to make the tough decision to either eat the reduction in profit or raise the prices on their clients.

“We’re doing everything we can to keep jobs in New Jersey and it gets harder every day.” Gary Duboff, President of Arrow Fasteners added while discussing how his competitors are unaffected because they are importing finished product, which are not yet subject to tariffs. “We would love to buy wire in the US, we just can’t find it.” Duboff said.

Senators Anthony Bucco and Rice agreed with the issues with the tariffs and have committed to work towards resolution. “Thank you for letting the legislators know these problems,” said Senator Bucco. “I think we should look at Senator Bucco’s bill and put it into consideration,” Senator Rice added. The bill would allow corporation businesses tax credit and gross income tax credit for purchase of steel and aluminum for manufacturing.

Senator Gopal moved on to the topic of Apprenticeships with a new panel of manufacturers to give their testimonies on the issue. Manufacturers are having an issue bringing in young people that are motivated to work and stay past their apprenticeships. Amy Eskilson, CEO of Inrad Optics was the first to speak on the issue. “We need people to replace the people that are retiring.”

The panel went on to discuss their opinion on the future of the industry and a strong need to find young adults that want to work in the industry. They also raised the issue on how many young adults may not realize that there are other opportunities and career paths available i 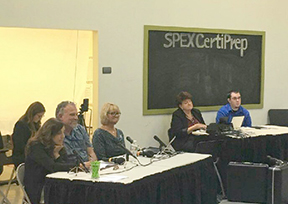 n advanced manufacturing through trade schools, vo-tech county schools and others. College isn’t the only option for a successful career and we need to work on changing the perception of the industry so students can understand they have multiple options. Gary Slawik, Manager of Apprenticeship and Training Programs at Bihler of America spoke to the issue. “The problem today is finding young people that really want to work.” Gary said. Some ideas of solutions were mentioned on how to get these young people more motivated to work, and guide them to find out what they really want to do. “Instead of offering free college to everyone, I would like to suggest free training for people.” Gary added.

“There are plenty of professions out there that require a lot more and pay better than a 4 year degree.” Senator Gopal said to close out the discussion on the topic. “We absolutely should require High School classes between grades 9 and 12 to at least make one class trip to a manufacturer in New Jersey,” Gopal added.

The final topic that was raised was the potential $15 per hour minimum wage. There was not much disagreement between the manufacturers and the Legislators on the impact an increase of minimum wage to $15 per hour would have. “We have to think hard about raising the minimum wage to $15 an hour. If I pay someone who just started $15 per hour then I will have to pay current employees at that pay rate $18 per hour, and the people I pay $20 an hour $25 an hour, and it just keeps going up from there.” Senator Bucco said.

Manufacturers brought up how they are fine with the raise being federal, but they are not fine with it being just the state when other states are paying $7.25 an hour. Steven Holland, from Carry Cases Plus spoke on the issue. “We can’t raise our minimum wage to $15 an hour when other states like Arkansas or even Pennsylvania are paying $7.25 an hour.

Important challenges and important solutions were discussed at great length during the New Jersey Legislative Manufacturing Caucus, and all concerns were heard to their fullest extent. NJMEP CEO, John W. Kennedy, closed the meeting with wise words. “Hear what you say, and we need to pay attention to what we say.” “We need to continue this conversation, and both sides need to be involved. If the industry isn’t involved, it doesn’t help you learn,” added Kennedy.