Where Are The Women In Manufacturing? 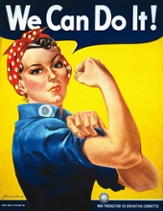 Back in February, we published a blog entry entitled, “The Need for Rosie the Riveter in Manufacturing.” It was very well received, so we are exploring the topic more.

In manufacturing, it’s still a man’s world. Women are represented at all levels of medicine, law, and financial services. But even though women represent 50 percent of all workers in the US, very few have risen to middle or executive ranks in manufacturing.

Some experts believe that women may represent the largest pool of untapped talent for companies in manufacturing today—especially when over 600,000 manufacturing jobs going unfulfilled each year because workers don’t have the right skills.

A more diverse workforce increase return on equity and creativity

Hiring more women can have a number of advantages for manufacturers. Diversity has been shown to encourage creativity. It also helps companies nail down contracts with certain large customers such as municipalities that look for diversity when they select their suppliers. Finally, diversity can bring with it greater profitability. Studies from organizations such as Catalyst have shown that Fortune 500 companies with a high percentage of women officers have 35 percent higher return on equity and 34 percent higher total return than companies with fewer women executives.

Although it’s hard to say what is holding women back in this field, educators and a number of professional organizations are trying a number of approaches. In the academic sphere, many schools are encouraging STEM education at a younger age. These fields of study—science, technology, engineering and math—frequently are the first step toward careers in the field of manufacturing.

An effort is also being made to change the image of manufacturing. Gone are the days of grubby, 19th century factories. Today’s manufacturing world consist of well lit, modern, clean facilities where a knack for management or technology may be more important than muscle power. In addition, today careers in manufacturing pay as well or better than many other professions. In 2011 the average manufacturing employee earned $77,060, substantially above the average worker in all industries who earned $60,168.

The program included the launch of STEP awards in 2013 to honor outstanding women in manufacturing on a nationwide basis. Two employees of Sandvick Coromant in Fair Lawn, NJ were among the 2014 New Jersey STEM awardees—

These women represent a new, younger generation of women in manufacturing, women whose contributions to their companies are outstanding. So what would encourage more women to select manufacturing as a career and stay in the field as they move up the ladder?

A report put together by Deloitte and the Manufacturing Institute entitled Women in Manufacturing: Untapped Resource in 2014 gave some answers. The researchers interviewed 600 women in the field of manufacturing to find out what they believed would help women progress in manufacturing careers. Here are some of the recommendations that emerged:

Adopting these strategies might go a long way toward helping New Jersey manufacturers attract and retain more women employees. While it is still true that far fewer women tend to earn degrees in engineering and technology, there are certainly a several outstanding Jersey schools and colleges where employers can search for qualified graduates such as the New Jersey Institute of Technology  and Stevens Institute in Hoboken.

At the same time, manufacturers should remember that some women—the same as men–may not start their manufacturing careers with heavy scientific backgrounds. But they may become attracted to the field for other reasons—the products themselves, the export side of the business, management or the possibility of stable employment in a modern environment. All these factors can help New Jersey manufacturers attract and keep more women in their workforce and thus gain the advantage of the greater creativity gained by diversity.