New Jersey manufacturers have been opening their doors to legislators both congressional and state.  A most recent visitor was Congressman Leonard Lance, who visited High Bridge N.J. manufacturer Custom Alloy Corporation.  Lance, Vice Chairman of the House Commerce, Manufacturing and Trade Subcommittee, has made it a priority to visit local employers to better understand the tools needed for job creation and economic growth.  Custom Alloy’s President, Adam Ambielli, hosted the visit.

Custom Alloy specializes in time critical manufacturing and does reverse engineering when companies are in need of rapid fixes for broken parts of unknown origin. The company, whose customer base is international in scope, has carved a niche in high risk areas such as nuclear work and deepest water drilling, is highly involved in oil, gas and mining.

Congressman Lance was particularly intrigued with Custom Alloy building’s history. “Students of New Jersey history know that the community of High Bridge has a long and storied manufacturing history that dates back to Union Ironworks established in 1742,” he pointed out.  Custom Alloy has been manufacturing in that facility for over 45 years.

Touring the facility, Congressman Lance and Mr. Ambielli discussed the challenges faced by manufacturers both in the state and nationwide.   Mr. Ambielli pointed out that the single greatest threat, not only to Custom Alloy but all manufacturers in the United States, is the shortage of workers with a specific skill set, e.g. Machinists, as reported on CBS News, August 2010 and 60 Minutes, November 2012.

“It is an honor to represent companies like Custom Alloy in the Congress of the United States who continue New Jersey’s strong manufacturing tradition. I was impressed by the global scale of the operations and the commitment to excellence Custom Alloy shows in its production. The fine staff showed me tremendous quality work that took a great deal of care and attention,” said the Congressman. 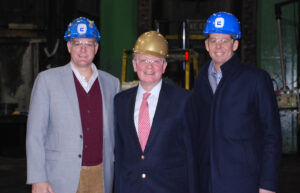