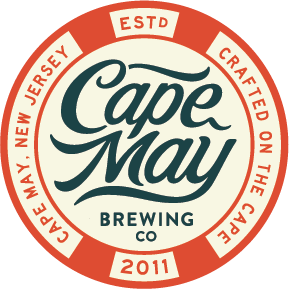 About Cape May Brewing Company:

The beginnings were humble. In 2011, Cape May Brewing Company launched with a 12-gallon brew system and a single beer, appropriately named Cape May IPA. Now, CMBC has over 100 beers on its roster, and they're set to produce 15,000 barrels (472,500 gallons) of the good stuff this year. By 2016, they'll be New Jersey's third largest producer of craft beer.

In order to keep up with demand, the company has expanded its digs, recently adding a second, 15,000-square-foot production space at Cape May Airport. This warehouse is home to a new bottling line and brew house that services over 300 accounts throughout Jersey and southeastern Pennsylvania.

Of course, some people prefer to drink at the company's own tasting room (which offers the widest selection of any in the state), or in the comfort of their own homes (CMBC offers 32 and 64-ounce growlers to go).

Some of the offerings have garnered national attention. The brewery won three medals at the Best of Craft Beer Awards Oregon, including a silver for their Coastal Evacuation Imperial IPA, a silver for the Tower 23 Berliner Weisse, and a bronze for Devils Reach Belgian Ale, CMBC's most popular pint.

The names of these brews and others reflect the Cape May area. Tower 23 is a World War II artillery tower near Sunset Beach; King Porter pays tribute to the Cape May Jazz Festival; and the Turtle Gut American Sour recalls a Revolutionary War battle fought in present-day Wildwood Crest.

But the brewery doesn't just talk the talk – they incorporate local ingredients as well. The Avalon Coffee stout is made with the house blend of a nearby café, the Honey Porter requires 90-pounds of fresh Jersey honey for every 15-barrel batch, and the Beach Plum ale is made with – you guessed it – local beach plums.

Not too shabby for a couple of thirty-something guys – and one guy's dad – who first brewed a batch of beer together during a weekend at the Jersey Shore not all that long ago.

Cape May Brewery beers are available in bars, restaurants, and liquor stores. The tasting room (1288 Hornet Road, Cape May County Airport off Breakwater Road, Lower Township) which also features a new outdoor beer garden, is open every day from noon-8pm. For information on tours, taps, and tastings visit www.capemaybrewery.com (609) 849-9933.